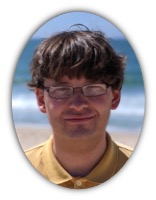 After having studied Computer Science with a minor in Physics and an emphasis on Theoretical Computer Science as well as Programming Languages and Compilers, I started my doctorate in Theoretical Computer Science at the University of Stuttgart, which I finished in 2020. While my senior and diploma theses were on the Krohn-Rhodes decomposition theorem and decision problems for formal languages described by two-variable logic and the attached semigroups, I primarily worked on decision problems and structural properties of automaton semigroups and groups for my doctoral thesis. Generally, my research interests lie in algebraic decision problems and the application of methods from combinatorics, logics and automata theory to algebra.